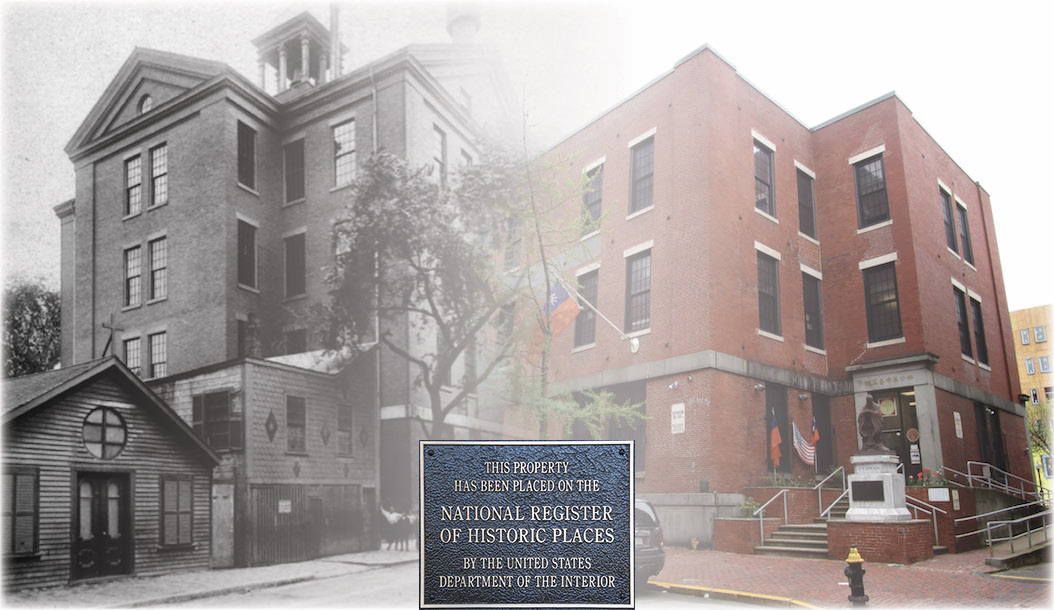 At 10 a.m., Sunday, August 13, 2017, Mayor Walsh and the Chinese Consolidated Benevolent Association of New England (CCBA) opened the 48th August Moon Festival with an announcement that CCBA's headquarters, located at 90 Tyler Street, Boston, has officially been listed on the US National Register of Historic Places. “I am thrilled that Chinatown is finally receiving national recognition for its Chinese immigrant heritage. For over 150 years, the Chinese settled in Boston and built a community. The Old Quincy School has served many immigrant families and we are proud it is finally receiving prominent attention.” stated Paul Chan, CCBA President. Betsy Friedberg of Mass Historic Commission and Michael Creasey of the National Park Service will also join in this celebration.

The Massachusetts Historical Commission and the Chinese Historical Society of New England, CHSNE, spearheaded this effort with receipt of a $20,000 grant from the National Park Service Underrepresented Communities Fund. Of possible sites identified, the Quincy School ranked highest based upon historic and cultural significance, as well as its largely intact historic condition. Constructed in 1848, the Josiah Quincy School features the first classrooms separated by age and grade in the United States, recognized as one of the first Horace Mann Schools. Elementary aged immigrant children from the Chinatown area attended class there within for 135 years, until 1983 when the building was conveyed by City of Boston to the CCBA for use as a community center. Since this time, the CCBA has operated this building as headquarters for its 34 umbrella member organizations, and as local incubator for 27 Chinatown based traditional cultural arts, dance and music groups.

With placement of Quincy School on the National Register, Boston’s Chinatown joins communities across Massachusetts and the United States in honoring its immigrant heritage, commemorating the sacrifice of its cultural ancestors whose struggles have contributed to the building of the American, melting-pot nation. The Quincy School is the first building on the East Coast and 13th nationwide attributed to Chinese Immigrant history. CCBA and CHSNE’s collaboration included public meetings to spread interest in Chinatown history, forwarding recognition of an official Chinatown history, or “context study,” by the National Park Service . This study provides reference dates and places for use in the ongoing recording of local history, provides a factual basis for Chinatown heritage tours, and will allow Chinatown building owners seeking historic recognition to more easily apply to the program. More information about the National Historic Register is available in Chinese and English at CHSNE.org.

CCBA’s continued role as a historic leader in preserving Chinese cultural heritage and bringing unity to Boston’s Chinese immigrant community is also recognized with this honor. Founded nearly a hundred years ago, the CCBA of New England was chartered out of Beijing via New York City, and since has continued to operate as gatekeeper representing Chinatown’s interests locally and nationwide. In addition to hosting community meetings, forums, performances and exhibitions at the Quincy School, CCBA is primary sponsor of major Chinatown events including the Chinese New Year Lion Dance and the August Moon Festival.

The Massachusetts Cultural Council awarded CCBA a grant of $30,000 to study the feasibility of creating a visitor center on Chinese immigrant heritage at Quincy School. Plans include exhibit space, digital media, a heritage trail to showcase Chinatown’s immigrant history, and potential connections to nearby established Boston tourism routes. This study will consider improvements that would facilitate an enriched experience for visitors and residents, while preserving the historical character of the building.

The announcement was made at the main stage located at Phillips Square, Chinatown Boston.

Since her appointment to the federal Advisory in 2011, Terry, who is based in Chicago, has been supporting the growth of Asian American Pacific Islander Heritage nationwide. Two Advisory Council listening sessions in 2015, at Angel Island, California, and at the Old South Meeting House in Boston, helped kick off the Boston National Register project. Terry assisted with connecting the Chinese Historical Society of New England (CHSNE) with the building owner, the Chinese Consolidated Benevolent Association. CHSNE as recipient of a National Park Service underrepresented communities grant, provided local support for the official Context Study, recording historic settlement and the history of Chinese immigration into Boston's South Cove. CHSNE's successful community outreach, including bilingual translation of the National Historic Register information is helping the 150 year-old Chinatown Community become a stronger destination associated with the Boston Historical Park . TGDA is proud to support Terry's extensive pro-bono work, connecting people of all communities in our nation. More information can be found at http://www.achp.gov/chinese.html